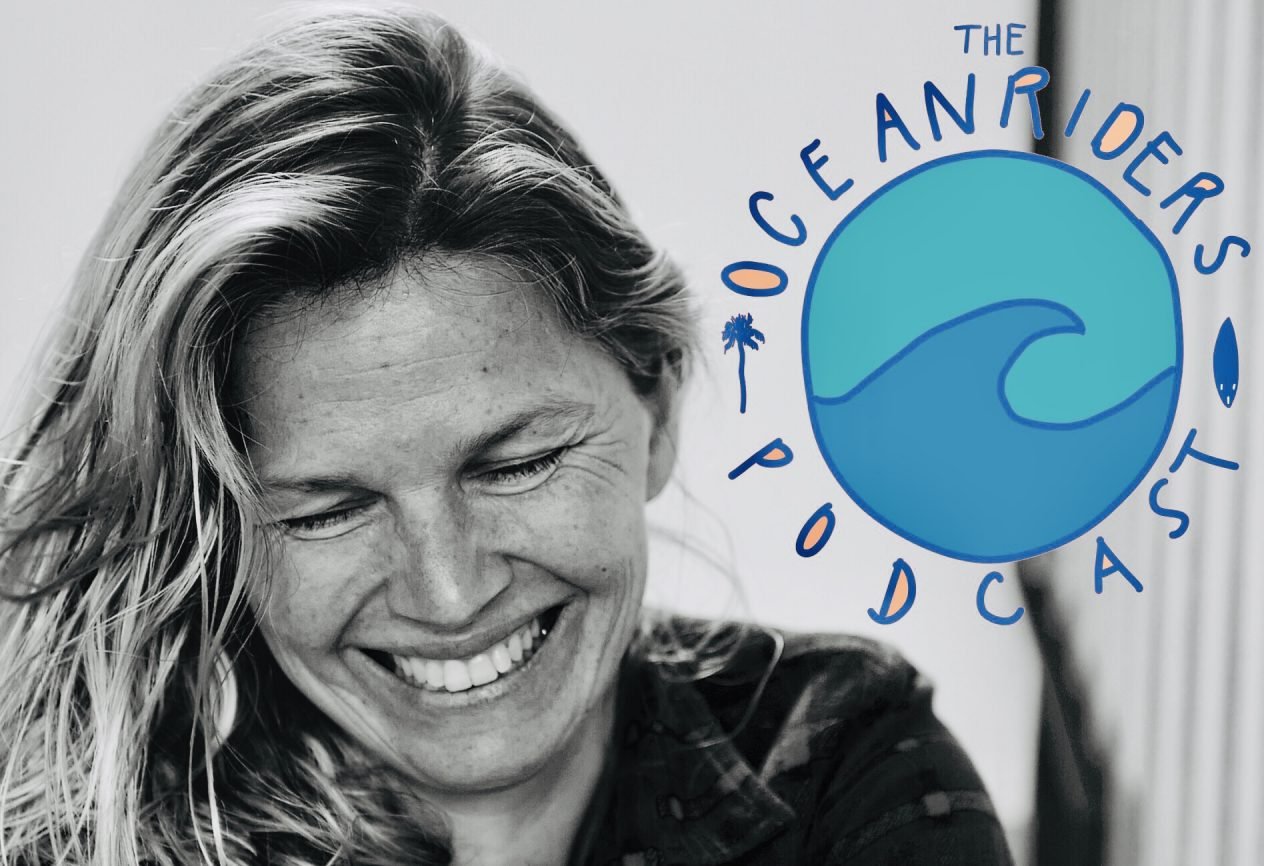 Imogen Barneaud always dreamed of living like a hippie. As a child in the seventies, Imi’s parents introduced her to a nomadic lifestyle. By the age of 11, she had already moved back and forth from the UK to France—twice.  At 17, the movie, “Point Break” flooded Imi’s brain with visions of waves. She went surfing for the first time while visiting the island of Maui, catching a mini-wave on an oversized, soft-top board.

“I was blown away by the exhilaration, the sheer thrill of surfing and, of course, its values,” says Imi Barneaud.

Although she returned home to a land-locked city, the spirit of surfing permeated her lifestyle. With her first paycheck, she purchased a 7’2″ yellow banana board that she found in Hossegor, France. Speeding down the motorway at 60 mph, new surfboard on top of her car, Imi glanced in her wing mirror—just in time to watch her surfboard take flight into the air behind her. Imi neglected to properly strap the new board to the roof rack. Fortunately, her banana wasn’t completely squished.

At 18, Imi moved to dreary London.  On the weekends—to keep her spirits up—she’d drive to Devon, on the coast. Her Stormrider Surf Guide in the passenger seat.  Surfing the icy British waters made her head hurt. She’d sleep off the ice cream headaches in her car. Tired of brain freeze, Imi ventured to Australia in search of warmer waters.  In Oz, she scored fun waves and became a more confident surfer.

Months later, Imi Barneaud was in the Canary Islands. Standing on the beach. Staring out to sea at the beautiful uncrowded point break, enticed by barreling waves. Seduced by the ocean, she paddled into an empty lineup.  Her dream turned nightmare. Imi realized that she had severely underestimated the size and raw power of the waves from her previous sandy-toed vantage point. The ocean picked her up. Swallowing her. Thrashing her violently across the reef. She emerged from the depths with a solid head smash, a shredded wetsuit, and a massive bruise that would take months to heal. The experience left her terrified. Imi gave up surfing. Donated her yellow surfboard. Went home. Met the love of her life. Focused on obtaining her college degree; her career; starting a family. She even turned down a job with Rip Curl in Hossegor.

However, the Sea was not finished with Imi Barneaud.

Fifteen years later, while on vacation with her family in Lacanau, France, Imi saw how much fun her eldest son was having surfing. She also noticed a surf shop owner in Lacanau who would close his doors every time the waves were pumping. She loathed her soul-sucking corporate job and envied the freedom the surf shop owner possessed.

As soon as she was home from vacation, Imi enrolled her kids in surfing lessons. “Likewise, I would escape to the sea for my dose of medicine (vitamin-sea)”, says Imi. Eventually, her family of surfers moved to the Meditteranean coast. Still craving the freedom of the surf shop owner, Imi and her husband took a sabbatical to Bali.

In Bali, her children were enrolled in Green School. There they learned about sustainability. Imi learned about permaculture, alternative medicine, and superfoods. “Bali was heaven for hippies. My hippie dream come true,” says Imi with a smile. When she got home to France, she quit the corporate job and started a super-food business. The new gig was ok, but she had no time to surf. While in Bali she surfed a lot, reconnecting with the Ocean all over again.

After a few years, and a brief hack at art (@imogenscreations) Imi Berneaud eventually found her true calling. Today she has a freelance business creating websites, telling stories (translating them into French or English) and sharing those incredible surfing stories with her listeners on The Oceanriders Podcast.

Imi’s podcast is a series of weekly conversations with creatives, entrepreneurs, thinkers, and dreamers who also happen to be surfers. In Season One of The OCEANRIDERS Podcast, Imi managed to interview 30 watermen & waterwomen.  The success of her podcast has led to other opportunities including working with her sea-sisters at IMMERSION Surf Magazine by translating articles, developing their business, and spreading the good vibes of female surfing around the world.

“I’ve accepted the fact that I’ll never be able to go back to a “normal” 9-5 job. In the Mediterranean, where swells are really inconsistent (basically, they can arrive and go away in the space of an hour), you need to be self-employed to get out for a surf at the drop of a hat,” says Imi.

“What I really want to achieve with this podcast, is to show my listeners that it is possible to have a balanced life where surfing does fit into the equation.  Most of my guests aren’t professional surfers, they’re just people like you and me trying to make a difference and find a balance.  I love receiving guests who are changing paradigms, whether they are old or young.  In the same vein, I hope that my guests’ shared experience will help my listeners to find their own path and help them discover their dream job,” says Imi Barneaud, host of The OCEANRIDERS Podcast.

“In the Med, you need to find different ways of enjoying the sea, so when it’s flat, I’m out there swimming, SUPing, free diving, on a boat or just floating around listening to the underwater sounds,” says Imi.

Imogen Barneaud broadcasts live every Friday from her home on the Mediterranean coast in Les Lecques, France. She rides a Stewart 9’0″ single-fin longboard, and when the waves are big enough she paddles out on her Bali built Redz Wombat 6’0″.

Season Two of The OCEANRIDERS Podcast is currently underway.