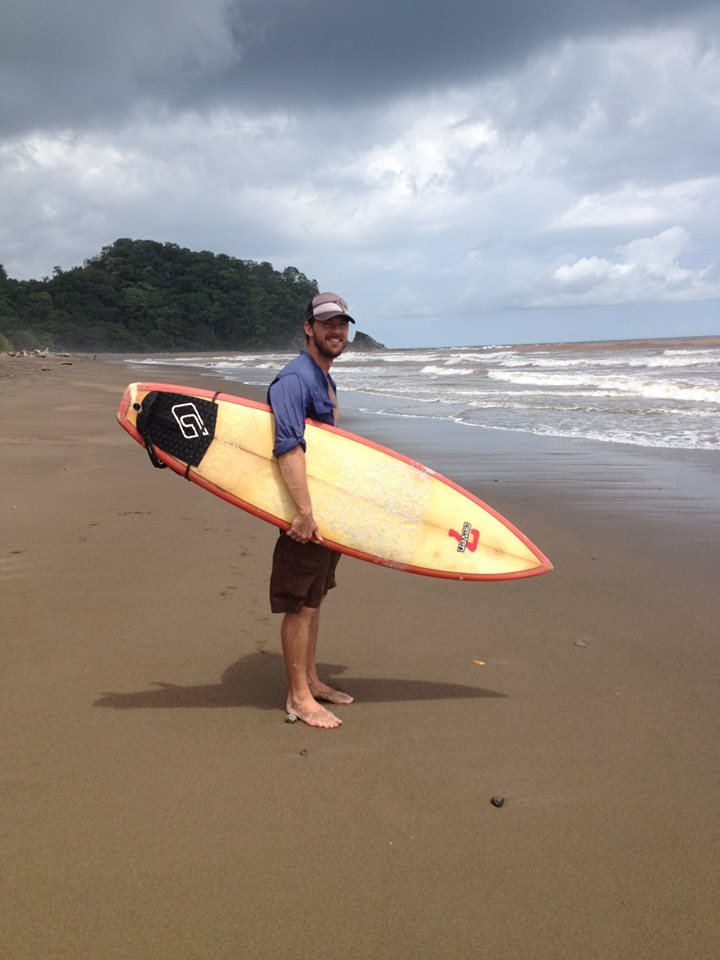 “For me, surfing is all about connection. No matter what is going on in my life, when I’m out there bobbing in the waves I feel connected to the Earth. It’s really the total package for Earthly connection. It can be social. It allows you to walk away covered in salt and sand (Earth). It challenges your body and settles your mind.”

Sean Robison figured out a loophole in the system…

…while in college at the University of Central Florida and was able to live in Guanacaste, Costa Rica (pictured above) while taking classes. Lectures and classes were so overcrowded at UCF that the University encouraged students to attend classes and view lectures online. In Costa Rica, Sean surfed every day multiple times per day and when it was time for exams he’d buy a ticket and fly back to Florida for a week.

After graduating UCF, Sean left the warm saltwater to mountaineer in Colorado where he learned to climb, snowboard and appreciate the seasons.

Remembering all those waves he caught in Costa Rica.

One night, coming home late from his job as a restaurant manager, Sean turned on the television news and saw a little girl in tears.  In tears, because she (along with 3.5 million other people) had just lost her home in Nepal to a devastating 7.8 magnitude earthquake.  In tears because her mother (along with nearly 9,000 other people) was dead.  As he watched the news, Sean realized that he also was in tears.

Up for the challenge.

He felt in his heart that he had to get there, to Nepal, a country he’d never been to; a country he knew nothing about, to help those people—so he went online and booked a flight.  The next day, using his contacts in the restaurant industry, he organized a gala and raised nearly $25, 000 for the Nepal earthquake relief.  Armed with willing compassion and scared out of his mind, Sean called his lifelong friend, Ben, and told him that he needed his help.

Sean and Ben (friends since kindergarten) arrived in Nepal in late April of 2015 where they linked up with a man named, Prakash Ojha, founder of CASD (Common Action for Sustainable Development) Nepal.  Prakash welcomed them to help lead emergency efforts on the ground.  Together they helped build temporary shelters that eventually housed over 500 people.

When Sean returned home to the United States he founded, CASD-USA.  He and Ben returned to Nepal—six months after the disastrous earthquake that struck Nepal on April 25, 2015—to help build a pipeline that brings freshwater to over thirty families in a small village outside of Kathmandu for the first time in their lives.

From his home in Southern California Sean Robison (@manymoremiles) continues to manage his non-profit that facilitates funding and promotes the programs of its partner, CASD-Nepal, in order to improve quality of life through community-driven, rural development projects such as community centers and medical clinics.  He is also in the process of starting a company called, “Giselle B” based out of Carlsbad, California that will make high-end fashion products and support social and environmental causes around the world.

When Sean is not working or doing his part to save the world, you might catch him surfing waves at Terramar in Carlsbad.  If you happen to see him in the Ocean, paddle over, maybe give him a wave (the rideable, watery kind—not the “hello” with the hand kind), ask him why he is so passionate about helping those in need?  Then, ask your self, what are you passionate about?

Sequoia National Park, Sean (red) and Ben are up there somewhere.

Sean (@manymoremiles) and lifelong brother from another mother, Ben (@benjaminbeenjammin)

“It brings light into my soul to know that deep down when given the opportunity, most people on this planet will do the right thing.” -Sean says.

To learn more about how you can volunteer to help the people of Nepal, or to donate, click: